Hoofprints in the Sand – a review

I’ve just read a great book for horse lovers and here’s my review:

Hoofprints in the Sand is a great read for horse lovers – and those who don’t think of themselves as horse lovers will still find plenty to intrigue and fascinate. It’s clearly based on a lot of hard research but the result is very readable.

Hoofprints in the Sand was the first ever book to compare and contrast the USA East Coast herds of feral horses and ponies – but it is so much more. 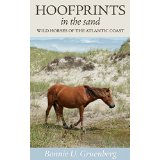 For example, did you perhaps read the book Misty of Chincoteague or see the film “Misty” about the wild ponies of Assateague, an island off the coast of Virginia, USA? If so you’ll remember the famous annual round-up and swimming of the horses across to the mainland. Hoofprints in the Sand has plenty of facts about these ponies and those on other “barrier” islands, together with explanations of their likely heritage and why horses and ponies were bred on islands. You’ll also find out too how wild horses behave – and why.

The book includes some fascinating snippets of information including (in random order):
• Grass contains silica (basically sand) – and so wears horses’ teeth.
• Horses were the most abundant large animals a million years or so ago, after bison and mammoths
• Horses shipped by the Spanish after their discovery of the “new world” had only a 50% chance of surviving the trip

The book authoritatively corrects a number of misapprehensions about mustangs, their origins and behavior.

There are some accounts of key horse-breeders over the centuries and about specific horses and herds.

Finally, there’s a chapter on where you can actually visit to see the East Coast horses discussed in the book, there are some useful tips for campers on how to avoid inadvertently endangering these beautiful horses and ponies – oh yes, and there’s a bibliography in case you’d like to read more.

There’s a whole chapter of wild horses – of many continents in Lights! Camera! Gallop! The Story of the Horse in Film:

to find more films, more horses in films, check out:

London Film Festival: a few thoughts of 7 films to catch – or not…

Some quick thoughts from the train back from London:

The first three I saw were:

The Salvation: a Danish Western with – amazingly – Eric Cantona (and yes, lots of horses). Great homage to both the conventional Western and the Spaghetti Western

Rosewater: directed by the Daily Show’s John Stewart. A film about a journalist incarcerated and interrogated in Iran with the very, very watchable Gael Garcia Bernal and the Danish guy from The Bridge. I really, really recommend this film. Excellent. Grim subject but very uplifting turnaround.

The Keeping Room: an American civil war film (The Keeping Room) with three amazingly brave, strong women (has a few horses in it) . The good guys (weren’t we taught that the war was about ending slavery) were definitely not good guys in this as they burn the South and attack the women. Still, it is a film.

My next three, the next day were:

Stereo – A German thriller. This was too violent for me and I wasn’t too keen on the hallucination and psych babble elements. Still it carries you on.

Betibu: An Argentine detective film. Now this one was quite stylish, reasonably good but a complex plot and more talking than action. (Confession: I did doze off momentarily…)

I can quite whenever I want:  a very funny Italian spoof on Breaking Bad it had a pretty good go at all 5 series in under 2 hours. All in the context of what the financial crisis has done for graduate unemployment in Italy. The nightclub scenes are especially funny.

Now to the last film I caught:

Jauja: set in Argentina in the 19th century but starring Viggo Mortensen and actually more in Danish than in Spanish. Spoiler alert: for the first 40 or so minutes, Viggo gets on and off his horse a lot. He drinks water from various pools. His horse drinks water. Now as you may know, I write about horses in films. So I’m a big fan of horses in film (his horse was a nice bay with a hogged mane) but even so, I did wish for a bit more action…. After the film, Viggo himself gave a Q and A session and just happened to mention that the script for this 108 minute film was only 19 pages…..

to find more films, more horses in films, check out the book above

Spoiler Alert: this may contain a few spoilers so… you might want to watch the film first.

The Lone Ranger film has now reached TV (at least here in the UK) so I’m re-issuing this (original, similar post in December 2013).  Also the DVD is out). This film has some tremendous horse stunts – some of which were filmed for real (a refreshing break from the  CGI). Yet the American Humane Association has given it the all-clear, issuing its famous “No animals were harmed” in the making of this film. So how did they do it?

The American Humane Association often posts film reviews which give some of the answers to this question. (They’ve got a great website). So this is what I found out:

For a start, as a matter of course, the horses used included specially trained “falling horses” and “lay down horses” that fell on cue and when they did that, their landing area was specially prepared to be soft.

Here’s how ten of the best horse stunts were filmed:

Like horses in film? Try “Lights! Camera! Gallop! The story of the horse in Film”. Lots of photos too.