Run for Glory – stunning film about a stunning racehorse

If you like horses, racing or classical music – or all three – do check out Run for Glory – Ode to a horse.

It’s a fictional account of a race horse from foaling to a tremendous win.  Director Ahmed Jamalat was inspired by fabulous Derby winner (1994) Erhaab. Erhaab’s win is said by the experts to have been a particularly exhilarating win. I missed that one – are there any readers out there who saw it and can confirm this (or otherwise)?

The film shows a mix of ups and downs in the life of the horse and his owners. I think the film’s particular success comes through his use of music to enhance the audience’s emotions. It’s set to two movements of Beethoven’s Symphony No. 9 ‘Choral’ from the Berlin Philharmonic Orchestra (conducted by Herbert von Karajan). 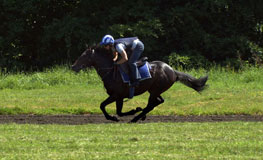 Be warned though. The film runs for only 35 minutes and it’s certainly not a Disney style film. And at £15 (at the time of writing) the DVD is not cheap. If it’s your sort of film it’s definitely worth it though. If in doubt, as ever you can check out the trailer on YouTube. Better still, the film has its own website at:  http://lifeofahorse.com/

(for more horses in more films, check out Lights! Camera! Gallop! The Story of the Horse in Film (Kindle or paperback)

Lesley Lodge now lives on a smallholding bafflingly close to Luton, England, but grew up in the New Forest and has worked for a racing stable, a palomino stud farm and a horse trainer. Her long-time ride is Freddie, a hairy bay cob mare with a long moustache. Lesley has had several short stories published. Blues to Orange, a story about a farmer ruined by the foot and mouth outbreak, was a Luton Literary Prize Winner and published in Junction 10, a collection of short stories. She has twice been a runner-up prize winner in the annual British National Short Screenplay Competition and was the Time Out and Jim Beam Bourbon Cult Film Buff of the Year some years ago. Lesley is always looking for new stories about horses in film or TV
View all posts by lesleylodge →