Sheep and horses usually mostly ignore each other in the field. My hairy cob and elderly sheep, though, are inseparable friends. I think the fact that they’re both herd animals helps – they do the “one keeping guard while the other sleeps” bit.

Here’s a picture of them relaxing this summer. 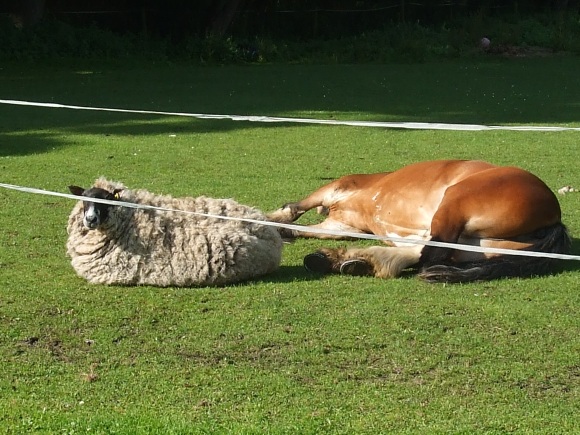 What amazes me, though, is that they will happily share a food bucket – I’ve not known a horse willingly share food before. 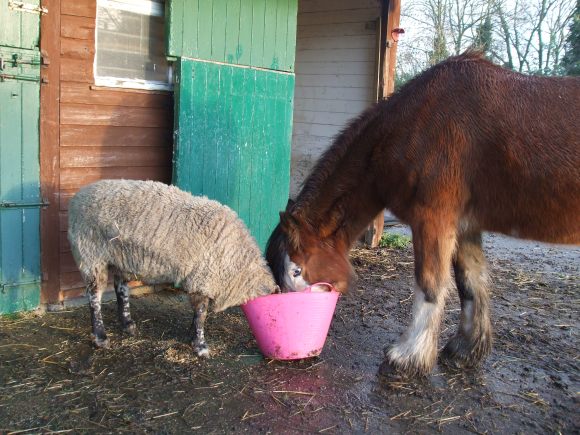 The relationship did come a little unstuck recently though. As they’re both native breeds and pretty rugged, they stay out most of the time but I leave the stable open for them to shelter in if they want. Recently I’d bought some really excellent quality straw (at least this year’s miserable excuse for a summer somehow produced a good crop of straw if nothing else). I put some down in the stable. Immediately, the sheep ran in there, circled a couple of times and lay down blissfully. The horse though nosed her off and started chomping away on her bedding. (Greedy animals, cobs – and more than just a little bit sneaky).

Anyone else know of any unusual buddies?

Lesley Lodge now lives on a smallholding bafflingly close to Luton, England, but grew up in the New Forest and has worked for a racing stable, a palomino stud farm and a horse trainer. Her long-time ride is Freddie, a hairy bay cob mare with a long moustache. Lesley has had several short stories published. Blues to Orange, a story about a farmer ruined by the foot and mouth outbreak, was a Luton Literary Prize Winner and published in Junction 10, a collection of short stories. She has twice been a runner-up prize winner in the annual British National Short Screenplay Competition and was the Time Out and Jim Beam Bourbon Cult Film Buff of the Year some years ago. Lesley is always looking for new stories about horses in film or TV
View all posts by lesleylodge →